In March 2018, a giant model of a 3D-printed house caught everyone's attention at the South by Southwest conference in Austin, Texas. four years on, not only has that model come to life in reality, but there's even been more than one 3D-printed housing neighborhood in real life across the United States.

That model was a 3D printed house developed by a local Austin 3D printing company, Icon, and a local nonprofit, New Story. At the time, Jason Ballard, one of Icon's founders, told reporters that the house, which was printed with a 3D printer, cost just $10,000 to build. "If the technology is more pure in the future, it will be possible to reduce it to $4,000." He described at the time that such technology could help people build a house of roughly 80 square meters.

At the convention at that time, Jason hoped that this model could really be put into use to help the world's homeless population solve the problem of living in the minimum shelter. At that time, there were about 1.2 billion people in the world who were in a state of displacement. 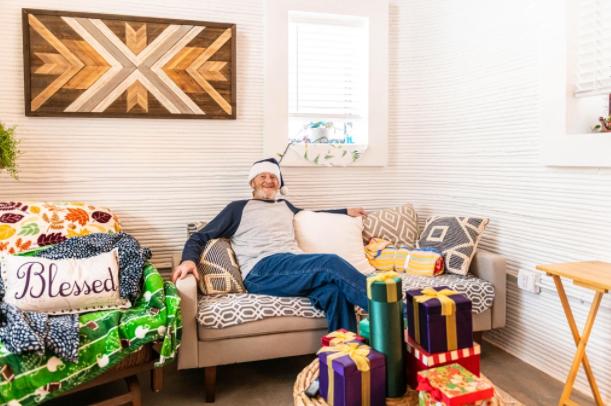 The entire house has one bedroom and one bathroom with its own kitchen and bath. 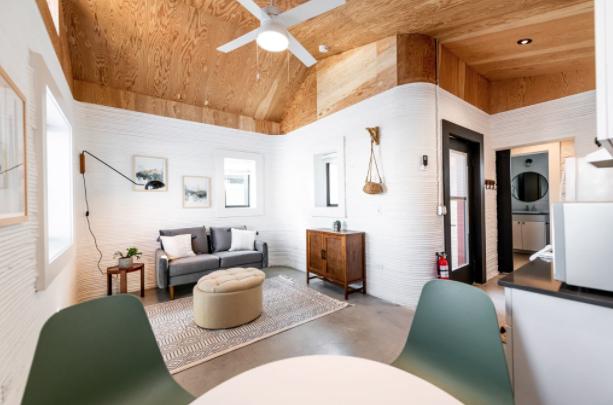 The roughly 40 square meter house became the first milestone for Icon and New Story to fulfill their promise and the first step in the application of 3D printed houses to transform human lives.

"If people would look at the different corners of the world, you would see that a lot of people really just need a little support and encouragement." Shea said in an interview with the New York Post.

According to Icon's calculations, printing such a house of up to 80 square meters only takes 12-24 hours to complete, far faster than the use of manual labor in the United States to build a house takes months or even six months to come much faster, and also reduces a lot of unnecessary waste.

Icon said to the public that they will build at least 100 such 3D printed houses for the homeless in El Salvador and Haiti.

During the construction process, their 3D printer is Icon's own developed Vulcan II, selling for about $250,000. 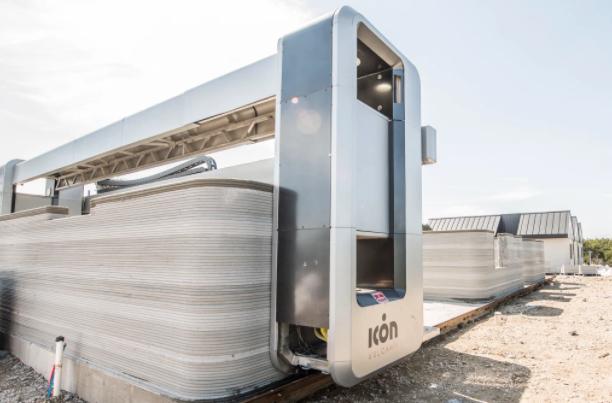 In the 3D printing process, the material in the printer is concrete, which is stronger and more waterproof than the wooden houses typically built in the United States. The printing process is such that the concrete is sprayed and extruded according to the drawings designed in advance. 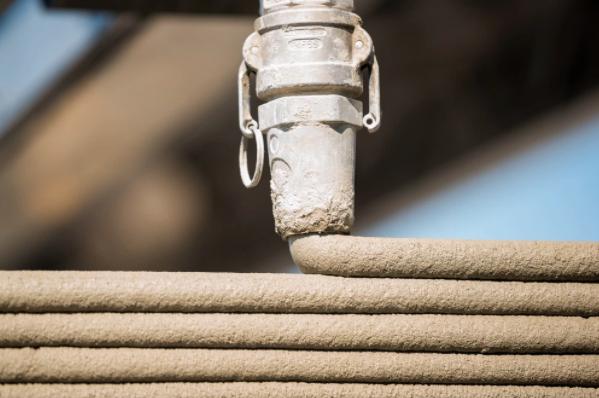 It can be said that if this model can be continuously replicated and expanded to more areas, once much neglected 3D printing technology can finally be landed to change human life, more importantly, to bring a home to the poor people.

Half-price houses and full 3D houses for the neighborhood

In addition to giving the poor a secure home, 3D printed houses have quietly become a housing option for more and more ordinary families in the United States. Unlike many people who think 3D printed homes are still just a novelty to try, many home buyers in the U.S. have already taken the plunge and become some of the first 3D printed homeowners.

Last week, a couple, Mitch Johnson and Patty Johnson, bought a $290,000 three-bedroom single-family home on Long Island, New York. In addition to the 150 square meters of home space there is an accompanying garden.

The status of this home for sale on the home buying website Zillow has now changed to "in contract process". About two months have passed since it was listed. As you can see in the media interview video, there has been a steady stream of people coming to see the home since it was listed.

"Having looked at a lot of old, run-down homes around here on a budget, this is one of the best." Patty said. In Long Island, New York, owning a similar single-family home would cost about three times more than this price.

In the interior video and Zillow's pictures, the home looks brand new and the overall decor is modern. In fact, it looks no different from the average house. In the previous construction video, the 3D printing machine left a line of pouring marks during the printing process. But after the actual house was built, the inside was very smooth. 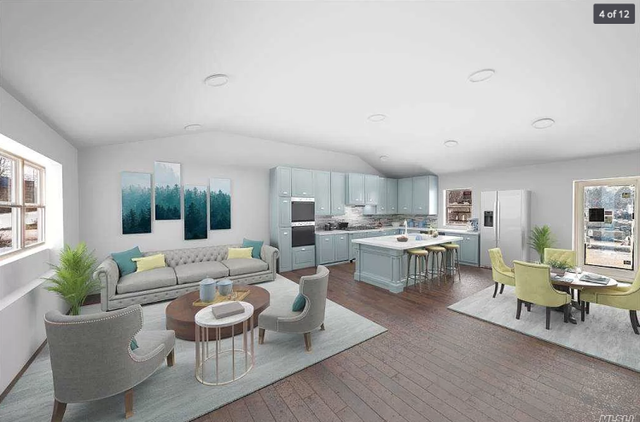 Builders say to the public that they can adjust the walls inside according to the buyer's needs. Simply put, you can have whatever you want. Even the windows and window frames can be 3D printed and finished.

CNBC's host said in a linked interview, "Even if you want your headshot on the exterior of the house, you can easily achieve it."

In other words, the era of Dream house (ideal house) may finally be opened by 3D printing technology - discuss the house template with a designer, and then a 3D printer can build you a unique house of your imagination in a few days, while costing just less than half of the price of the surrounding houses.

Once this 3D printing house technology becomes popular, it is likely to revolutionize the entire real estate industry.

In addition to this home in New York, Icon also announced last week that it has opened the sale of East 17st, a 3D-printed concept community under construction in Austin, located three miles east of downtown Austin. It will also be the first residential multi-story 3D printed home that will have multiple room types from 2 to 4 bedrooms, with an average home price of $450,000, half the price of the average home in the surrounding area. In addition to building 3D printed homes, the entire neighborhood is planned to be quite comfortable. 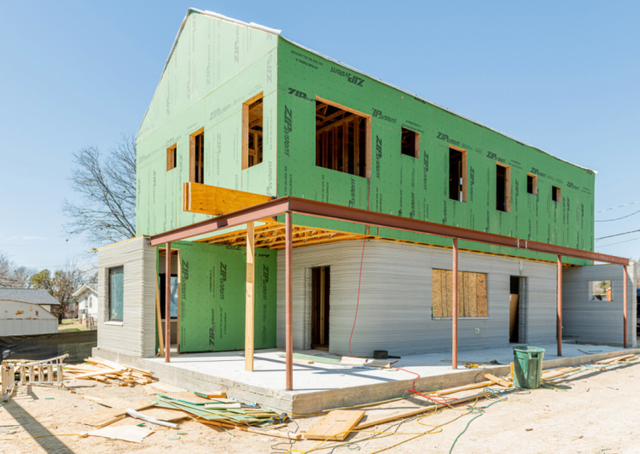 After logging on to the official website, Silicon Star People found that some of the rooms were already sold out. 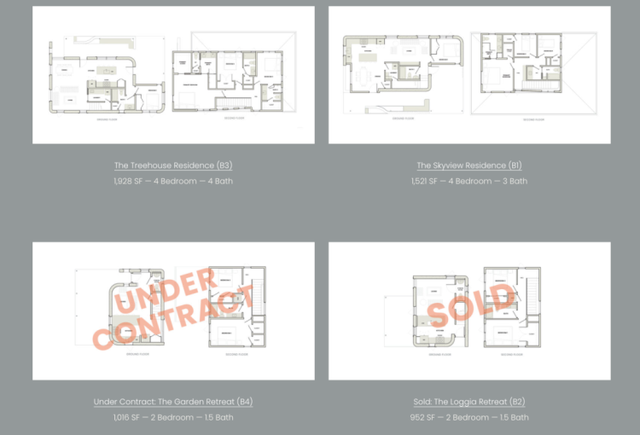 In addition to Austin, a fully 3D printed neighborhood is coming to Rancho Mirage, a neighboring city in Palm Spring, S.C. Compared to most people who still think 3D printed homes are still synonymous with cheap housing, builder Palari Group says we're partial to building it into an upscale community setting. In the promotion, Palari Group says this will be the first zero-emission 3D printed subdivision in the nation. Fifteen 3D-printed single-family homes will be built on more than five acres in the subdivision, which has opened early for sale. Each home will be approximately 150 square meters, and Palari Group will 3D print the homes using a composite stone that will be fireproof, waterproof, and even guaranteed not to produce termites.

Meanwhile, some of the panels needed to build the homes will be produced in Oakland through 3D printing and then delivered to the neighborhood construction site. "It's like building Lego, putting them together." Basil Starr, CEO of Palari Group, told CNN.

Some of the properties in this neighborhood are already being snapped up. While some people think 3D-printed houses are still a novelty, it has already given a group of people the priority of moving into an upscale neighborhood at half price, and even more homeless people a home of their own. 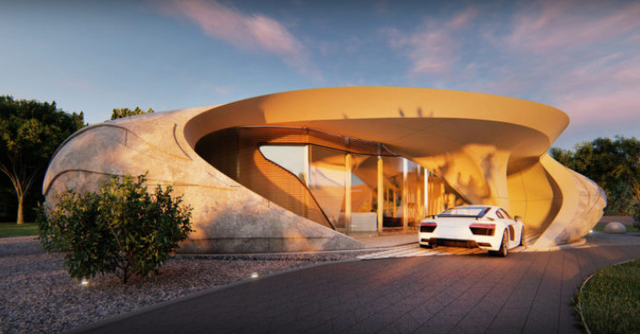 In addition, Icon received a collaborative contract from Nasa at the end of 2020 to research technologies that will enable the construction of 3D printed buildings on the Moon.

Through this project, Nasa hopes to build a long-term habitable structure on the moon in the future for astronauts to live in and explore and research on the moon for a longer period of time.

"Hopefully by the time that time comes, we'll be able to research and develop capabilities that will ensure that humans can build houses in outer space. " said Niki Werkheiser, head of the Nasa Game Changers project, in announcing the collaboration.

A short sentence describing what someone will receive by subscribing

You have 30 calendar days to return an item from the date you received it.